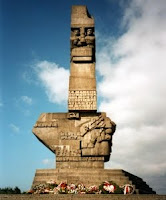 OK, back with batteries recharged (sort of) after a summer of drinking British ale, getting up late and getting married. I'm too lazy at the moment to find something to translate, let alone translate it, so just some things which have been going round my head in recent weeks:

I'm a history buff. I subscribe to BBC History Magazine and spend more money than I should on Amazon, buying books on anything and everything from Celtic Britain to Post-War Europe.
Given all this, you would think that the recent anniversary of the outbreak of WW2 would have made me happy-- plenty of articles and newspaper supplements to pore over. Not really.
The problem is that there have been so many of these anniversaries in such a short space of time (the Fall of Communism, D-Day, WW2 Outbreak and several more before) that they become depressingly familiar. Instead of dignified rememberance of human tragedy we get the undignified spectacle of politicians using these events as political footballs-- Putin says this, Kaczynski say this, ad nauseum.
It's not just politicians. In what I believe is called the 'Blogosphere', these anniversaries seem to coincide with sharp increases in ovegrown boys venting their WW2 reconstruction fantasies and naked xenophobia.
It is understandable that history forms a more important role in the public agenda in Poland than in other countries. This part of the world has seen more blood-shedding, brutality and back-stabbing than most. There comes a point, however, when the past dominates the present to an unhealthy degree. A casual glance at a Polish front page or news website in recent weeks would reveal that the news cycle is based almost exclusively on arguments about the past.

Let historians argue about the past, politicians are paid to think about the present and future. Hopefully there won't be any more controversial anniversaries in the near future and we can get back to the here and now.
Posted by Czarny Kot at 11:07