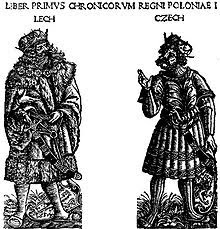 According to the legend, there were once 3 brothers: Lech, Czech and Rus. Lech went north, settled down and founded the half-mythical, half-historical Piast dynasty. His descendants are now called Poles.

Czech went south and settled down in Bohemia and Rus went far out to the east. Relations between Rus and his 2 brothers are well-documented but little attention is paid to the relationship between brothers (and next-door neighbours) Lech and Czech.

A quick sample of Polish and Czech language, cuisine and other cultural aspects shows that both nations are cut from the same cloth. For most of history the 2 countries have followed very different paths but in the last century they have similar experiences-- independence after WWI, occupation during WWII, Eastern Bloc, fall of Communism, entry into EU.

Despite, or perhaps because of, these similarities Polish-Czech relations have never been a shining example of brotherly love. True, there are none of the bad feelings which occur in relations with Germany and Russia but neither is there any real sense of kinship or solidarity. Why could this be?

From the Czech perspective grievances could include the disputed Cieszyn / Tesin region and the involvement of Polish troops in the supression of the Prague Spring.

From the Polish point of view jealousy (not a vice which is alien to Poland as even proud Poles will admit) probably plays a part. The Czechs are better off, have a nicer lifestyle and in many areas-- beer, supermodels, football etc..-- they always seem to be better, despite their small population.

Another reason could be language. Although Czech and Polish are very similar, Czech does bear an unfortunate resemblance to toddler-speak to Polish ears. Even the best-intentioned Pole might struggle to keep a straight face whilst listening to Czech. Obviously this does not go down well with the Czechs.

I recently went to Prague for my first trip to the Czech Republic (not counting a cigarette break in Brno bus station a couple of years ago) and I am happy to report that there are signs that the 2 brothers might be getting closer. First of all, I have never heard negative comments about Czechs in Poland, just people laughing at thier language (and mullets). Secondly, people in Prague, who were already friendly enough, became a little bit more friendly when they saw my wife's Polish-Czech phrasebook on the table. Perhaps they were just happy to meet some tourists who didn't automatically speak to them in English...

By a happy coincidence, the very day I set off for Prague Przegłąd magazine published a piece about Polish-Czech relations. Here are 2 opinions taken from the article...

Q: Why do Poles like Czechs more than before?

I don't know why other Poles like the Czechs but this is why I like them:
1) The Church in the Czech Rep. plays no role in political, social or private life.
2) Every town and village tries to look like it comes from a fairytale.
3) Even in very small towns you can hire a bike.
4) On Fridays most people, even though they are at work, think about the weekend and make plans which involve more than just sitting at home.
5) They treat culture as an anti-depressant.

I couldn't say why as I have only been in Poland for a few months. However, I do know why Czechs are not so crazy about Poles-- they simply do not know them very well. There are no bad feelings but most Czechs cannot see anything interesting about Poland. When Czechs travel or learn about other countries they are more interested in places like France, Germany or England.

Interesting article. I'm probably too ignorant to contribute much, but from experience I've found them very different people. The Czechs (or so I've found) are less intense and more forward looking: largely uninterested in blaming the Russians for their current situation.

Based on fairly limited interaction, but those are my impressions...

An interesting comparison. Czechs seem a bit more rebellious as well and not so apathetic about global politics-compare the reaction to the missile shield in Prague to Warsaw where there were a few hundred protestors and more police than protestors.

I know I'm being demanding but could you translate the message Roger Scruton sent as an official statement of support to the conservation group.

"Krakow is a symbol of Poland and its culture, a city that maintained its moral and aesthetic identity throughout the worst experiences of the 20th century. For those who came during the last days of communism it offered the face of hope, and its beautiful architecture and dignified streets spoke of the historical Poland, which was determined to endure beyond the years of oppression. It's ancient university, its royal castle, its churches with their unspoilt interiors, and its magnificent market square all embody the idea of the city as a seat of learning, culture and religion, and a place where the nation shapes itself by building a home. There is no place like this city on our continent, and I fully endorse the work of CUE in its determination to save Krakow for future generations. All over Europe the predators are at work , exploiting our heritage for financial gain, and in the process destroying it. Let them not succeed here, in the heart of Poland. For if they succeed, the whole nation will suffer in its soul".

Then give me your address to my email and I'll send a bottle of fine Tokaji for you and the wife in late March just before Easter !!!!

@Gregor: I would say it's an accurate impression, as it's the same impression I got and, more convincingly, my wife got.

In very simplistic terms you could say that Czechs are Poles who have learnt to count to 10, take a deep breath, calm down and enjoy life a little bit.

Whether this is down to innate national characteristics or is shaped by circumstances is another question.

@Karl: Unfortunately i've never tried translating from English to Polish before. My written Polish is barely adequate for a short text message.

I can have a stab at it but it'll take a while and you would have to get a Polish speaker to check it (all the endings, cases and the like)

If you need it done fairly quickly you'll be better off finding a Polish translator. I'll do it for my own interest anyway and when i'm finished you can let me know if you still need it.

Ok, it will be difficult to get the style of Scruton in Polish as it comes across in English without losing his prose style. Have a go and then we cam modify it with Polish help.

Interesting.... As a Czech who visited Poland years ago and only as a kid I view the Poles as our closest brotherly nation. I admire their bravery, "act first think later" attitude which of course did not exactly help them in the course of history, their anti-Russism and sense of preserving their independence at any cost. It is unfortunate that our politicians (=Benes and Beck in particular) weren't able to come to terms, settle their differences and set up some sort of federation that might have forced Hitler to think twice before expanding east. I also view role played by the Polish church in their society as something positive; Czechia with its atheist attitude stands in high contrast to Poland. It is true the Czechs know little about Poland these days, it's a pretty much unknown destination ... Lot of Czechs wouldn't know where to go and what places to visit.....I only know Krakow and that Warsaw was completely destroyed during the war.....and yet I'm sure there must be thousands of great places to see about which we - the Czechs - have no clue......

all had been presented with a perfect through this website .. sharp and accurate information reliable .. thanks you have willingly cara memperbesar penis shared with us.

Hi all, living in Krakow for a better part of year already I already heard many time that Czech language sounds "funny" to Poles. I still don't understand what exactly is so funny on it, I would call it anything but funny. Definitelly can understand that people don't like it. Now I don't want to offend anyone, but I remember beginnings living in Polish environment and I remember I had very strong feeling and thoughts that some speech impairments that are treated by logopedist in Czech rep. are suddenly right way how to pronunciate in other language. I really don't mean to offend anyone but it really sounds like if illiterate or retarded czech would speak. I saw many and am trying to be objective. And yet I only hear that Czech language is somehow "funny". Maybe this is the same that Poles mean by "funny" while describing Czech talking. Definitelly funny to explain native English speaker that those two languages are really something different and they don't believe we mostly don't understand each other. Crazy world of languages.. But it is definitelly worth of making contact and focus on contents of sentence and not form. I just wanted others to realize, I hope, objective way how to see those differences from all sides. Won't argue with anyone.