Apocalypse Then: Haiti circa 1502 AD. 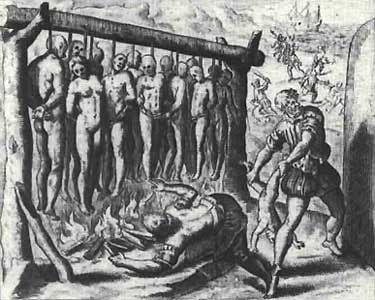 The island which we now call Hispaniola was the first to be settled by christians. Immediately after their arrival the plight of the natives began. The christians started by taking away the women and children of the indians as slaves. Then they started taking away the food which the indians had produced with the sweat of their brows. They were not satisfied with what the indians offered voluntarily as it was not much (it is their custom to only store enough supplies for the immediate future) and because what would suffice an indian family for a month was devoured by a christian in one day.

All this, and other acts of violence and aggression, quickly led the indians to conclude that these men could not have come down to them from heaven. Some hid thier food supplies. Some hid thier wives and children. Others fled into the mountains, away from the fierce, terrible newcomers. The christians attacked with fists, blades and sticks until they were able to seize the chieftains. Such temerity and shamelessness led to the wife of the most powerful king, ruler of the whole island, being raped in public by a christian captain.

After this incident, the indians began to look for ways to expel the christians from their lands. They took up their arms which are offensively weak and defenisively even weaker. To Europeans, thier warfare resembles little more than a children's game. The christians with their horses, swords and lances inflicted many massacres and strange cruelties upon them.

They would enter villages and no child, old person or woman would avoid being diembowelled and dismembered like lambs in a slaughterhouse. The soldiiers would make bets with each other on who could cut a man in half with one stroke or decapitate him with one blow. They took newborns from their mother's breasts by the legs and smashed their heads against the rocks. Others they threw into the rivers to drown.... others they put to the sword, along with their mothers. They would tie up indians in groups of 13 in honour of Our Saviour and the 12 apostles. Then they would burn them alive. Others would cover individuals in dry straw and burn them that way. Some would not be killed. They would cut off both their hands and send them into the mountains as a message for those in hiding. Chieftains and lords were usually burnt by a slow fire so that they would die slowly, screaming until their souls departed their bodies.

On one occasion I saw a group of 4 or 5 indian nobles burning slowly on a pyre. Such was their shouting that the Spanish captain, either from pity or a desire for quiet, ordered them to be taken off the fire and drowned. The master of arms who was to carry out the order (I know his name and am acquainted with relatives of his in Seville) didn't want to drown them so he opted instead to put sticks in their mouths to silence them and put them back on the fire so they could slowly roast as he wished.

I have seen all the above with my own eyes, and many other atrocities. Because so many indians fled into the mountains to escape from these inhuman, pitiless and ferocious beasts, the Spaniards trained wild hounds which, upon sight, would tear an indian to pieces in the blink of an eye and eat him as if he were a pig. These dogs were responsible for many terrible massacres. Sometimes, although few and far between, the indians would with great justification kill a christian. The christians then decreed that for every one of them killed by indians, they would kill a hundred natives.

Bartolome de las Casas was a Spanish Dominican priest and the most vocal opponent of Spanish atrocities in the Americas.

I don't why I chose to translate this. The idea just came to me, I took the book off the shelf and did it.

Everyone knows about the conquest of the Aztecs and the Incas but the original inhabitants of places like Hispaniola, Cuba and Jamaica are often forgotten.

It's a sad truth that successful genocides are the least remembered.

I believe the French gave the indigenous property rights, that slaves didn't get. That would be to keep them divided from slaves.

Interesting piece. I just wonder how people would act now if they were given total control over people and could treat them as they wished with impunity?

Have a laugh at this spat between Protect Krakow Heritage and rabid nationalists and my response to them.

all of which have been presented by this website was perfect, good appearance and artikelnya..penuh color and full of meaning .. cara membesarkan penis