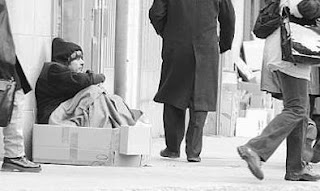 Like the rest of the Northern Hemisphere, Poland has recently been in the grip of sub-zero temperatures and heavy snow. The worst conditions arrived before Christmas and show little sign of letting up. Whilst the effect on travel has been well documented, less publicised is the challenge that the conditions pose to Poland's homeless. Here is an extract from 'Przegłąd' magazine in which Andrzej Dryszel finds out how homeless people in Warsaw survive the big freeze.....


When the temperature plummeted, the exodus began-- homeless people left streets, empty houses and allotment sheds and moved to heated sewers and train and bus stations. Not all of them made it. On the Saturday and Sunday of 19th/20th December, 42 people froze to death in Poland. This is a record number, but winter has barely begun. Overall, cold weather in November and December 2009 caused the death of around 80 people. In the 21st century. In an EU member state. In a country which avoided the worst of the financial crisis....

"Sudden falls in temperature are a danger to the lives of the homeless, the elderly and those who live alone" warn police authorities. Police spokesman Mariusz Sokołowski has appealed to the public to inform police of the whereabouts of bivouac sites used by the homeless, as it could save lives.

In the North Praga neighbourhood of Warsaw, young police officers Katarzyna Nowosielska and Marcin Zarzyckim are on evening patrol along the bank of the Vistula. Such patrols, which check on how homeless people are coping, have been carried out over the previous few days. The officers carefully observe an allotment garden from a vantage point on higher ground.

"If we see a wisp of smoke then that means that someone is in the allotments and is trying to keep warm. We will then go in and check that they are OK and that nothing bad is happening." Says officer Nowosielska. On this occasion the frozen air is clean, without any sign of human prescence.

The homeless like to live in allotments. Sometimes they live there so long that they turn the sheds into something approaching real houses. As well as shelter, they can also take advantage of the vegetables grwon on neighbouring plots. However, come winter, it is difficult to survive there. There is no water or power. It is necessary to continually feed and look after a fire, either on the floor of the shed or in homemade stoves. If people fall asleep they can burn to death in the shed or die from smoke inhilation. On the other hand, if the fire goes out, those asleep can freeze to death. Fire and ice are winter's main weapons against the homeless.

It also occurs sometimes that allotment owners come to visit their plots in winter, in which case it is necessary to leave. The owners are very rarely aggressive towards the homeless but neither does their prescence fill them with joy. "These people have my respect and sympathy but the government should do something about this problem. Allotment sheds are not designed to be lived in during winter. In winter, the water and power supply to the allotments is cut of..." says Eugeniusz Kondracki, president of the Polish Allotment Owner's Association.

The best place in North Praga for the homeless in winter are the sewers which contain pipes leading to the power station in Żerań. 3 metres underground it is warm, you know you will not freeze and there is no owner who might come and turf you out. Homeless people also like to seek shelter in Central Station, the best-heated amongst Warsaw's train stations. In the station toilets it is possible to have a quick wash and anyone in difficulties can easily find medical help. On the negative side, it is quite common for homeless people to be robbed there, so they have to keep a careful eye on their belongings. Another problem is that after midnight the security guards empty the station building and underground passages. Those wishing to stay have to far down the railway tunnels where it is cold and dark.....

Andrzej Dryszel is a Polish journalist. Translated by Czarny Kot 19/01/10

Central-Eastern Europe Watch has been concealed as Roger Scruton has added his name to our conservationist cause and he suggests that Anne Applebaum is willing to help as she is angry at the new acrhitecture in Krakow too.

For pragmatic reasons I have had too remove the criticisms of Radek Sikorski & the Missile Shield in order to advance this localism cause which CAN attain victories.

I have more change of saving buildings and making statements from the mountain that people will listen too on that, than trying to pretend I can alter global politics.

The blog WILL appear again once I have the patronage of famous names to protect Krakow heritage.

PPS The translations are of great interest NTW. I'm just flat out here with this campaign . I WILL comment later. Please leave a sentence of too on my blog ( just so it doesn't glimmer away meaninglessly in the cybersphere ).

Gee after looking at another Polandish blog on the subject of Polish beggars, I thought this article would be funny too. But I guess there's not too much so funny about 42 beggars freezing to death.

Czarny can you translate the gist of this in a paragraph and then just thes specific lines and sentences.

You know I might have to pay you for this. If so send me your bank details & I'll deposit something in it. It must surely take you time, though it might be good practice for you. I don't know.

The gist of this piece I mean. Not in much detail