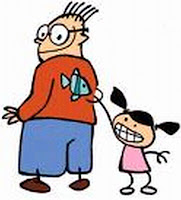 Watching Channel 4 News on the internet the other day, I was looking forward to some absurd stories to mark April Fool's Day. I wasn't disappointed.

Firstly, the creation of a nature reserve in the Chagos Archipelago means that the rights of sea slugs take precedence over the rights of humans.

Secondly, a Lebanese man faces execution in Saudi Arabia on charges of 'sorcery'.

Sadly, neither story was an April Fool's joke. Oh dear.

It seems that the venerable tradition of April 1st is under threat from the increasing absurdity of reality.

PS: For more information about the plight of the Chagossians click here.
Posted by Czarny Kot at 09:33

Excellent comments from Davies, though I think the protests in Dominikanska here in Krakow were a bit unseemly given the fact many died on their way to commmorate the 70th anniversary of Katyn.

However, Davies makes the obvious point that Kaczynski was a political figure in Warsaw and not Krakow and should have been buried there not in the Wawel.

The usual halfwits who hate me from Polskie Radio came on my blog condemning me for saying much the same thing.

The point being missed is that, unlike Davies, I see no reason not to be more forthright and say that Kaczynski was unworthy of being buried in the Wawel as a "national hero". He just was not.

Kaczynski belonged to the tradition of the pre-war Endencja, Dmowski's National Democrats who dislike real heroes such as Pilsudski and Wladyslaw Sikorski whose tragic death in 1943 was a real loss to Poland.

Kaczynski's loss is a loss to his family and that, no matter what one thought of the man, it does not change the fact that the decision to bury him in the Wawel, as opposed to Komorowski, was rash and impetuous.

Sikorski was a liberal in a way Kaczynski was not and a war leader of the Free poles. To accord, by potential insinuation, that Kaczynski was of the same calibre in defending Poland from its enemies after liberation is a mistake.

Davies probably does not want to say this because he enjoys a popular status in Poland and will most likely wait later to make a historical appraisal. But notice he had nothing positive to say about Kaczynski.

As for my blog I'm getting attacked for stressing the Habsburg heritage still extant in Krakow and PiSite paranoid comments that they did nothing for idn't know its the cradle of culture in Poland Krakow and that Krakow is a really Polish city ( as if I didn't know that ). Sheeesh.

BTW, I'm picking up the New Cold War by Lucas with Davies' foreword which I think is naive and too fulsome in its praise for what id one dimensional propaganda from a neoliberal ideologue.

Nice information,, terrimaksih infonya..sukses much for sharing the info and the website is always to be the best and do the best to the next information .. cara memperbesar penis terbaik

Do not compare people who love you with your past. Appreciate he is now trying to make you happy.
http://bit.ly/1GorWFZ