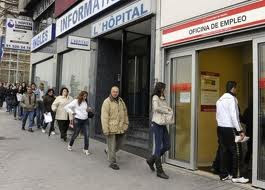 23 year-old Abigail Serrano from Cordoba is a coroner's assistant but she has never worked in her profession. After being unemployed for a long time. she eventually started working as a waitress. "It was only possible because of some contacts. I was really lucky." Abigail is right to use the word 'lucky'. In Spain almost 1 in 2 people aged 16-25 are jobless. Young people are eagerly learning foreign languages and are dreaming of emigrating, mostly to Germany. Spain looks set to experience a fuga de cerebros, or 'brain drain'. The most dynamic and best educated are leaving, at great cost to the economy. Luis Oliveros, an aerospace technician from Madrid, is heading for Germany. Since finishing his education he has only worked in casual jobs. Luis has tried numerous times to find a job via the job centre but without success. "They only offer courses, courses and even more courses but no jobs." Last year more people emigrated from Spain than immigrated there, the first time this has happened.
Spain is the Euro zone's 4th largest economy but it is suffering acute unemployment-- the highest in the EU and maybe even in the whole industrialised world. According to government figures, 410,000 jobs have been lost in the last 12 months. Unemployment grew by 112,000 in February alone. 4.7 million citizens are without work, the highest rate since 1996, when a new method of measuring unemployment was introduced (according to other figures the number of unemployed stands at 5.3 million.) The Spanish Employment Ministry does not publish unemployment statisitcs as percentages but the European statistics bureau Eurostat said that in January the unemployment rate was 23.3% overall and 49.9% amongst the young.


The economic situation is worsening. The conservative government of PM Mariano Rajoy has promised the EU that it will reduce its budget deficit from 8.51% in 2011 to 4.4% this year. It is now clear, however, that this will not be possible. Last year Spain struggled to get out of recession, achieving 0.7% growth. The government predicted minimal growth (0.2%) for this year but even this modest goal is too much.

People do not have work, they limit their spending, demand plummets and the economy stalls. Even the Prime Minister warns that worse is to come. The IMF estimate that the economy will contract by 0.7% in 2012. The Spanish government has asked the European Commission to allow them a budget deficit of 6% this year. Pessimists say it will be higher.

Premier Rajoy, whose People's Party (Partido Popular or PP) were victorious in November's elections, claims to have inherited Spain's economic woes from his predecessor, Jose Luis Zapatero of the centre-left PSOE party. However, this is only partially true. The growth of the budget deficit last year was caused mainly by the profligacy of Spain's autonomous regional governments. The centre-left central government had a minimal effect on deficit growth. Most of the regional governments were under the control of Rajoy's colleagues from the PP.

Unemployment in Spain is traditionally high and its somewhat archaic economy requires reform and investment. Digital infrastructure and computerisation is below the EU average. In Andalucia, which depends on tourism, only around half of the businesses in the tourism sector use computers. When Spain joined the Euro zone in 1999, the government failed to carry out essential changes. The government was cautious about getting into debt with the new currency but was ready and willing to let its citizens borrow freely, especially during the construction boom which became the motor of the Spanish economy. Many people wanted to buy a new home, or a second property. Others bought speculatively, hoping to sell the property at a profit.

The boom was fuelled by mortgages, which the banks were keen to offer. Between 2004 and 2008 property prices jumped 44%. The construction industry created employment, economic growth and tax revenue. Between 1999 and 2007 the economy grew by an average of 3.7% a year. Politicians, convinced that the good times would last forever, allowed the cost of labur to rise by 36% from 1999 to 2008-- in the same period the cost of labour in Germany rose by barely 3%.

The construction boom turned out to be a trap, however. Neither the central nor the regioanl governments invested in other sectors of the economy and they neglected to invest in new technology. The construction boom was also rife with corruption. Between 2006-2009 the regional government of Andalucia alone investigated 179 cases of corruption connected to illegal construction on the coast. As construction work does not require many qualifications, many young people dropped out of school looking to make quick money.

In 2008 the bubble finally burst. The cranes stood still and the workers suddenly found that they had neither a job nor any qualifications. Property prces fell by 17%, even 40% in Madrid. From Castille to Catalonia, Spain was left littered with unfinished buildings and so-called 'ghost towns' such as the El Quinon housing development half an hour's drive south of Madrid. In a development of 5,000 homes there are only 1,000 residents. An 84 square metre flat can be bought for 89,000 euros compared to 165,000 in 2008. Banks are offering a 100% mortgage but still there are no buyers.

Once the property bubble had burst the rest of the economy started to sink. It turned out to be uncompetitive, partly due to high labour costs. Tens of thousands of small businesses had to close. Finding a permanent job became something akin to a miracle. In Spain there are 2 classes of workers: older employees who have long-term or permanent contracts which make them hard to lay off and the young who have only short-term contracts.

The young can only hope to find casual work. Jose Maria Navarro, co-founder of Inplasnu, a cable producer, employs 22 people, of whom only 4 are under 25. "I can't hire anyone on a permanent contract because if the company runs into difficulties I won't be able to lay them off", explains Navarro. In Cordoba, 96% of the employment contracts of city council workers are short-term.

When the Zapatero government started to implement reforms and savings in 2010 it was already too late. Public sector pay was cut by 5% and the retirement age was raised to 67%. These austerity measures were opposed by the so-called 'indignado' movement. The protesters also railed against the whole economic system and the duopoly of the 2 main parties, PP and PSOE, which control a system of patronage and favouritism. Protesters set up camps in Madrid and other cities but the demonstrations soon lost momentum. While the parallel movement in New York was still protesting against Wall Street, the Spanish were packing up thier tents and heading home. Nonetheless, anger at the economic situation forced the PSOE into opposition after 8 years in power.

The conservative government of Mariano Rajoy, which took office in December, has continued the austerity measures. On 10th February the government announced plans to freeze public sector pay and the minimum wage (641 euros a month). It is hoped that these measure will save 8.9 billion euros in 2012. There are also plans to make it easier for employers to lay off workers. This has led trade unions to call for mass protests in defence of workers' rights. During one such demonstration in Madrid the leader of the UGT union Candido Mendez claimed that the reforms "have been dictated by a group of financiers working on behalf of the German government." It is hard to see how the stifling austerity measures are going to get the Spanish economy out of recession and decrease unemployment. What is certain is that even if the EU manages to save Greece from bankruptcy-- something which most economists agree is at best doubtful-- in the case of a similar crisis involving Spain there wil not be enough money for a bailout.

The original Polish article can be read here.
Posted by Czarny Kot at 12:39

This article makes some pretty valid points. The use of computers is a bit behind the times even where I work in an "international" school, though that is now changing. Mentalities are more often the problem but it is the old fashioned nature of this country that can sometimes be its best points.

The only point I would dispute in this article relates to the claim that "the [construction] boom was fuelled by mortgages." This is only partly true because it does not acknowledge the pushing up of land/property prices by those who bought up big time despite living outside Spain. Equally, the author does not mention share prices and other financial market speculation as a major factor in overheating the economy. His suggestion that the protestors have largely stopped protesting is also incorrect.

Nice work, Czarny! I have blogged and linked to your translation here:

I'm afraid I don't have much time to respond properly to your points, Easter can be a busy time in Poland.

Any inaccuracies in the article might be due to: the fact that it was written at least 4 weeks ago, inaccurate translation of tricky passages by myself or simply that Spain is somewhat off the radar for most Polish people.

This article will really help for life .Thanks fore your post.

the article is very amazing and very very good

When we are already one of the majors, does not mean we should be one of the future.

eToro is the #1 forex broker for new and professional traders.