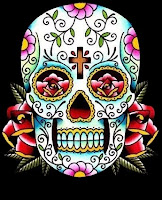 While the world focuses on places such as Iraq, Afghanistan and Sri Lanka, one of the bloodiest conflict in recent years has been the brutal drug war in northern Mexico. A seemingly endless stream of brutal and gruesome murders has become so normal that they hardly seem newsworthy. However, the following story represents a dark and disturbing episode, even by the horrific standards of recent times......

Morelia, Michoacan state, 3rd July-- Officers from the Justice Department found 5 mummified corpses, 4 of them buried underneath inversed crucifixes, along with dozens of dead animals, an altar, candles and skulls. Among the sacrificed animals were toads, ducks, lambs, chickens and turkeys. 4 of the corpses were buried under a tree. The fifth corpse was found in a room, painted black, covered in bandages and sitting on a chair placed upon a table.

Authorities can confirm that the bodies were found in a large 2-storey farm house in the commune of Coatepec de Morelos, in Zitacuaro. Officers confiscated 100 cartridges of different calibers, as well as an AK-47 assault rifle. Items of uniforms belonging to the National Defence Forces and local police were also found.
There were no arrests during the operation.

I was trying to compile an article from news on the internet on the current clash of Mexican government and the drug cartels from a religious point of view. What made me do it was hearing about this event.

Would you be able to provide some more context on the cult in which this ritual murder took place. Since I know really little about Mexico’s religious scene can it be related to the Santa Muerte worship?

I read your request this morning and I had a quick look on the internet. Unfortunately, I haven't been able to find any more details-- every search seems to lead back to the original article which I posted.

It is not a subject I follow very closely, I just came across the story by chance and thought it was interesting. If I find any more info. i'll let you know here.

Good luck, with the article and keep me updated. Sounds interesting.

I think I can do without it. I will add a link to this post to my digest from internet articles that I am currently preparing. My feeling is that the religious side of the conflict calls for a detailed investigative study which unfortunately for many reasons I can't undertake.