Rural Poland-- Garden of Eden or Heart of Darkness? 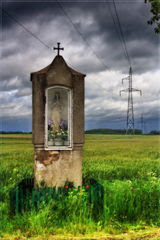 The recent popularity of films and TV programmes with rural settings has raised the question of how the countryside is perceived in modern Poland, and what this tells us about the country and its people. Is the countryside a rural idyll? Or a bastion of backwardness and superstition? Here is Robert Walenciak, writing in 'Przegląd' magazine......

Who to believe? Rural Poland is seen from 2 different perspectives. From one point of view it is an oppressive place which crushes individuality and is run by closed networks of family contacts and friends of friends. The people are suspicious of the outside world and at the same time they take too much interest in the lives of others, because their own lives are so unfulfilling.

From the other point of view, the countryside is a serene, welcoming place. This is the image that we can see right now, in films and TV programmes which are breaking box office and viewing records.

Rural mafias? Nonsense. It is simply social cohesion. People look after their own. All for one and one for all-- that's a good thing, right? Suspicion of the outside world? Does the outside world really deserve to be trusted? A slow, lazy pace of life? Isn't that what we all dream of?

This is the side of rural life that the Polish public want to see, and film and TV producers are happy to oblige. "U Pana Boga za Miedza" is the latest production in this current trend-- a crime comedy set in a small village in Podlasie. People go to watch it and they leave the cinema happy. The 2 prequels which preceded it were received with equal enthusiasm. Then there is "Ranczo", "Plebania", "Ojciec Mateusz"..... We are currently seeing a steady stream of films and TV series about the countryside, that good peaceful countryside. It is worth asking what lies behind this trend.....

Why sentiment? Because millions of us grew up in similar small towns and tiny villages and now we want to indulge in nostalgia about the good old days? Do we miss our happy, care-free childhoods?

Why the popularity of skansens (open air folklore museums)? Because they are oasises of peace and quiet, a shelter from the large cities and their relentlessly buzzing lifestyles? Because in a skansen people don't kill for money?

These are all good arguments but they do not explain everything.

Could it be then, that it is the great characters which make these films so popular? The village policeman, the provincial mayor, the parish councillor? Surely not, these stock characters have been with us since the 17th century!

Or perhaps we love these films because they show us ourselves, but in a more positive light. Of course, we all have our faults but in the big scheme of things these are minor defects which make us more colourful, more loveable. Gluttony? Go to a Polish beach in summer and try counting how many slimmers you can see. Ignorance and superstition? Perhaps it's better to be a peasant than a stuck-up know-it-all.

If films depict dreams then you could draw the conclusion that in today's Poland, there are not too many big dreams. Things are fine as they are. In the Polish countryside teenage boys do not play forbidden music in garages, wannabe directors do not make amateur films, the good people are among us and if anyone is bad they are probably an outsider. Also, thanks to the internet, mobile phones and satellite TV, our perception of the countryside has changed. A person can live there, enjoy its peace and quiet without feeling isolated from the world.

Poles, battered by the storms of history, are certainly in need of a period of peace and rest. Time to get to know themselves, to focus on the simple things. It seems that most agree that now is the time.

Robert Walenciak is a Polish journalist and assistant editor of 'Przegląd' magazine.

It's like beauty and the beast all in one. On the one hand, we have a history of multiculturism and on the other you have conservatism, intolerance and downright stupidity. The Bieszczady's a great example. Keep blogging, Czarny Kot. I love the stuff you write. :-)
Raf

Hey, I just translated it but thanks anyway ;-)

I don't have access to a car so my travels around Poland don't stray too far from the cities. I've spent time in Mrs. Kot's home village and i've been drunk kayaking in the lakes around Chojnice but i've never been to deepest rural Poland-- Podlasie, Bieszczady etc.

PS: Other people have said that they had problems posting comments. I have no idea why, i'm not very good with computers.

Lovely picture; reminds me of Scotland.

It is curious that the word ‘superstitious’ is used. Do you think this means ‘devout’? As a devout and (I like to think) fairly educated person in a deeply secular country, I’ve long been interested in the exceptionalism of Poland and Ireland in Western Europe, in seeing faith and education as perfectly compatible. Poland produced several noted Roman Catholic intellectuals when faith was long dead in much of Europe. It seems that in recent years, Ireland has very rapidly joined the west in having a deeply secular intelligentsia.

I wondered if the same was true of Poland from your experience?

I wasn't exactly sure what word to use there-- the Polish word sort of means 'ignorance/superstition/darkness'.

Of course, in a country where round about 97% consider themselves practising Catholics, there are huge differences in outlook.

Devout Catholics range from fairly liberal intellectuals to firebrand priests who want to burn homosexuals at the stake. It really is a broad church.

At the same time, I do think that things are becoming more secular amongst intellectuals and academics. In the past, the Church and the Pope united the whole country. Now, with Communism and the Pope both gone, the Church is becoming more and more illiberal and interfering and a lot of people are turning away from it.

CK - good translation of an interesting set of perspectives. What part of the country are you and Mrs Kot in?