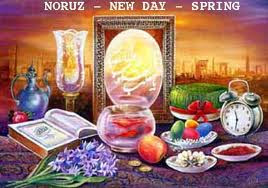 Washed carpets, clean windows, scrubbed floors, holiday napkins decorated with pictures of wheat, goldfish, eggs and the Koran-- this is how Iranians welcome the Persian New Year, what to us is the first day of spring.

Iranians wish each other Nowruz mobarak bad!  from 6.14 am (CET) on 20th March, the start of the new Persian year 1391. Nowruz, or Noruz, Nuruz, Norous, Norooz, literally means 'new day'. The festival is celebrated by 300 million people from north-western China to the Mediterranean, in Iran, many parts of Central Asia, Afghanistan, the Caucasus and amongst the Kurds. It is celebrated by Zoarastrians, Muslims, Christians, Agnostics and Atheists. In the ruins of Persepolis, near the present day city of Shiraz, there are a set of reliefs depicting people ascending the stairs to the apadana, bearing gifts for the king. According to some experts, these reliefs are an early depiction of the Nowruz ceremony.


Iranian women have thier hands full at this time of year due to the custom of cleaning, tidying and mending which needs to be completed before the new year. Cleanliness was important in the ancient Iranian religion of Zoarastrianism, which started the Nowruz festival around 3,000 years ago. It is also important in Islam. A clean body and soul means that one is ready for forgiveness, to start afresh in the new year.

This year, however, the festival has been somewhat overshadowed by smog-- air pollution is a huge problem in Iran. Iranians say that there has never been a new year like it. Almost every large city is suffocating in a beige-coloured cloud hanging over the western, southern and central regions of the country. Tehran has long been drowning in smog which has been worsened by a lack of wind and rain. "The traditional  Khaneh Tekani, the new year cleaning, has little effect against the soot and dust. One cannot smell the scent of hyacinths. Worst of all, people have difficulty even breathing. Headaches and a feeling of suffocation are everyday nuisances. The elderly and those suffering from asthma often die. Visibility is terrible. In most Iranian cities pollution is 4-10 times over the legal limit." says a young journalist from the BBC's Iranian section. The most polluted region is Kurdistan.

In the centre of each home there stands a table festooned with seasonal decorations. "My mother put down a white table-cloth on our best Persian rug in the corner of the dining room, we don't eat at the table. It is important that there is enough room on the table for 7 symbols, all of which start with the Persian letter Seen, or S", explains Maryan. Her cousin Luna places Sabzeh on the table. There are a type of green wheat shoots which symbolise the rebirth of nature. Next to it, in a silver dish, there is Samanu, a sweet pudding symbolising prosperity. Next comes Senjed, the dried fruit of the lotus tree, which symbolises love. "To this we add Seer (garlic), which is good for our health and Sib (apple) which represents beauty and health" explains Setareh, a chemistry graduate from Tehran university. Somaq are powdered berries which are the colour of sunrise. Serkeh (vinegar) represents maturity and patience. Sonbol (hyacinth) is a symbol of the coming spring. There is also a few coins, Sekkeh, for wealth and prosperity. As well as the 7 S's there is also a mirror, a symbol of truth and self-recognition, red eggs and a goldfish in a bowl. The goldfish is the most recent addition to the festive symbols, only being present on the table for the last 20 years. After the festival the fish are released into ponds etc. or are kept in fish tanks, to the delight of children. Iranian environmentalists nevertheless point out that last year Nowruz meant the death of 5 million fish.

The festive table is finished off with candles, symbolising fire, and a leather-bound tome of the Persian poet Hafez. Without him, the Iranian spirit doe not exist. He is quoted on a daily basis. His verses are used to foretell the coming year. "You choose a verse at random and then you all try to interpret its meaning" laughs Shirin, a long-haired architect originally from Azerbaijan. Muslims put the Koran on the table, Armenian Christians the Bible and Zoarastrians the Avesta.

Nowruz is the most important festival of the year. The celebrations are preceded by visits to cemetaries and  on the night from Tuesday to Wednesday in the week before Nowruz there is a celebration of fire (Chahar-Shambe-ye-suri) Bonfires are lit in the streets, just as they were in the fields and courtyards of times past. People young and old jump over the bonfires singing "my sickly yellow paleness is yours, your fiery red color is mine". This is to ward off illness and misfortune. Although Nowruz is an offical holiday in Iran, the bonfires and the demonstrations which often gather round them frequently end up in brawls between youths and the Revolutionary Guard.

On the same evening, family and friends eat a meal of white fish from the Caspian Sea and new members of the family, such as a son or daughter-in-law, are formally accepted. During this time clowns appear on the streets, dressed in red and with faces painted black. They are called Haji Pirooz or Hadji Firuz. Only they have the right to say whatever they want in the form of satirical verses, but only on this one day of the year.

Nowruz lasts for 13 days. Children are off school and markets, shops and public offices are partially closed. Young people pay visits to their older relatives, who later rpay the visits. As a rule, visits last for about 30 minutes as both large families and large distances mean that there would not be enough time to visit everyone otherwise. "We give out Armaghan, especially to children. These are new, unused banknotes which are then carried in the wallet for the whole year. The denomination of the note does not matter, the important thing is that they should be unused" says Mahdi, a poet. People nibble on peanuts mixed with raisins, eat special biscuits and cakes and drink tea whilst chewing sugar cubes.

Many Iranians make a pilgrimage to the tomb of the poet Hafez in Shiraz. The 13th and final day of Nowruz is Sizdah be da. in Iranian culture the number 13 can be unlucky-- the 12 signs of the zodiac control the 12 months of the year whilst 13 brings chaos. On this day people leave their houses so that evil cannot find them. Families go to parks and forests and eat picnics, dance and play music. Parades of cars clog the streets. At 13.00, girls sing in the streets to bring good fortune and a husband and baby within the year. "In Tehran we actually stay at home that day. the city is quiet and the smog is not as bad" laughs Reza. On the final day of Nowruz, one can see 'green rugs', dishes of green wheat shoots, travel by in car roofs. People give them back to nature by taking them to the nearest river and letting them float away with the current, along with all worry and illness.

Nice info. Thank you.
all face the problem. finish with a calm heart and brain are cold and are trying so hard ... cara memperbesar penis dengan mudah

Nice article Thanks for giving me this information
kursi tamu mewah

eToro is the #1 forex trading platform for beginning and professional traders.