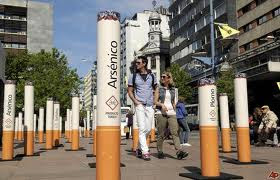 The Uruguayan government, concerned with the health of its citizens, has declared war on cigarettes. It has forced tobacco giant Phillip Morris, owner of the Marlboro Brand, into relocating one its factories across the border to Argentina. This is not an isolated incident-- more and more countries have launched similar anti-tobacco campaigns.

Uruguay's war aginst tobacco started in 2005 when the oncologist Tabare Vazquez became president. After a year in office he had successfully banned smoking in all enclosed public places-- in restaurants, pubs and government offices. Currently, smoking is only allowed at home or in open spaces. Violating the ban can lead to a fine of up to 1,100 dollars or 3 days in prison. The president justified the new law by pointing to research which states that in Uruguay smoking kills 7 people every day, or 5,000 a year, through lung cancer and emphysema. It is estimated that one third of Uruguay's 3.4 million inhabitants are active smokers. Vazquez has launched an anti-smoking campaign named 'a million thank-yous', after the approximate number of smokers in the country. Cigarrete producers have been forced to place health warnings over 80% of thier packaging and have been forbidden from labelling cigarretes as 'light'. The new rules have particulary affected Phillip Morris, whose annual income from tobacco sales of 67.7 billion dollars (2010) is bigger than Uruguay's GDP (50 billion). The government's tough anti-smoking stance is thought to have been behind Phillip Morris' decision to close its factory in Montevideo. Angry workers were paid off with a sum equalling 36 salaries each. Angered by the policies of the Uruguayan goverment, the tobacco giant has taken its case to the International Centre for Settlement of Investment Disputes (overseen by the World Bank) and is claiming 2 billion dollars in damages.

Another country which is waging war against tobacco is Austrailia, where federal law prohibits smoking in government buildings, airports and public transport. Other restrictions have been implemented by state authorities. In every state smoking has been banned in enclosed public spaces, especially restaurants and workplaces. The anti-smoking campaign was launched by the previous PM Kevin Rudd who said, "Cigarettes are not cool. They kill. We want to implement the strictest anti-smoking regime in the world."

His policies have been continued under the new left of centre govermnet of his successor Julia Gillard. In December of this year new rules will come into place affecting how cigarettes are packaged. All packs will be of a brownish-green colour which, according, to the experts, is the least attractive colour possible. Most of the packaging will be taken up by graphic images illustrating the health effects of smoking. The names of the brand and producers will be located at the very bottom of the pack and will be vey small. There will be no logos or any other identificable symbols allowed. This last rule is the one which has really got the tobacco firms up in arms and is the basis for their lawsuit against the Austrailian government. Phillip Morris, which has 37% market share in Austrailia thanks to the Marlboro and Alpine brands, claims that the new laws deprive it of its 'valuable brand and intellectual property', without offering anything in the way of compensation.

The situation in Austrailia is being closely monitored by other countries which are considering taking similar anti-smoking measures. Among them is Canada, where smoking in enclosed public spaces is already forbidden. In some provinces it is even illegal to smoke in a private vehicle if one is travelling with a child of under 14 years of age. Wide-ranging restrictions are also in the pipeline in the UK and New Zealand. In Norway, the state pension fund announced in October 2011 that it would sell all of its shares in companies which profit from tobacco. Phillip Morris was again badly affected. Iceland's goverment has plans to make cigarettes available on a prescription-only basis. Some experts believe that the next few years could be disastrous for tobacoo companies. "The industry is stagnant because every year there are less smokers, especially in developed countries where smoking will have disappeared altogether by 2050." says Adam Spielman, an analyst from Citigroup.

Tobacco firms are pinning thier hopes on the SE Asian and African markets, where there are virtually no smoking restrictions in place. These 2 regions are where the tobacco companies' profits are growing the fastest. In SE Asia 40-70% of men smoke, so the real growth potential lies with women. In Indonesia and the Phillipines, some brands of cigarettes are sold in packaging which is designed to look like a lipstick tube. Female smoking is also on the rise in Vietnam and Malaysia.

The original Polish article can be read here.
Posted by Czarny Kot at 23:43

Vaporfi is the #1 electronic cigarettes supplier on the market.

eToro is the #1 forex trading platform for new and advanced traders.