OPINION: Jan Widacki-- The Poets Have Gone, The Philistines Remain 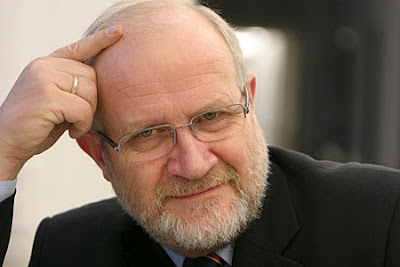 Wisława Szymborska has died. Her last wish was to be buried  in a secular ceremony at her family plot in Krakow’s Rakowicki cemetery. The National – Catholic RCight has a problem. Had she asked to be buried in the crypt of the Church on the Rock, like fellow Nobel laureate Czesław Miłosz, there would be a pretext for controversy, protests and to remind everyone that she had once written a poem about Stalin. Hell, who needs a pretext? That poem about Stalin will be dragged up anyway but such a request would have made a scandal much easier to create. Now, there is not much to be angry about. The Nationalist Right know that the greatest living Polish poet is Jarosław Marek Rymkiewicz, who has been forgiven for his past membership of the Union of Polish Youth (communist youth movement-CK) because he has become a Kaczyński supporter and has written a poem about the Smolensk disaster. He also has a beautiful name. The name of a true Pole, the truest of Poles..


For the Right, Miłosz was an anti-Pole because he jeered at Polishness. It could even be said that the was a Lithuanian and, as we all know, the Lithuanians hate Polishness and currently like nothing better than persecuting Lithuania’s Polish minority. Szymborska could be even worse. By asking for a secular burial she has only confirmed the suspicion that she was not a true Pole because everyone knows that to be a Pole, one has to be Catholic. She has excluded herself from Polishness. This is a relief for the Right., they do not have to try and prove it themselves. It is plain for all to see.

Szymborska’s death was noted worldwide. In the true Polish press it has not yet been noticed, but give them time. They will go to the nearest library, find that poem about Stalin and then start fuming and fulminating.

I remember Miłosz’s funeral and the protest committee that did not want him to be buried in the Church on the Rock. A competition to see who could outdo all the others in terms of stupidity, boorishness and rabidness!  Not even the appeals of John Paul II could convince them to moderate their stance. I also remember a recent debate in parliament in which politicians from PiS protested the decision to name 2011 the year of Miłosz.

By requesting to be buried in her family plot Szymborska has had the last laugh. How caould anyone object to such a request? People, however, will try and try again to find an appropriate stick with which to beat Szymborska. If they cannot find one they will simply ignore her.

Szymborska, like Miłosz, raised Poland’s profile abroad and her poetry galvanised our native tongue. To the right, all this means nothing. They have her in their sights. It is a strangely small thing this Polish National-Catholic Right. Not everything can fit into it.

Cyprian Norwid was more critical of Poles than Miłosz ever was. If they ever read him, the Right would strike him from the canon like they have done to Gombrowicz. Luckily, they are not especially well-read.

Our foreign minister Radosław Sikorski wants to demolish the Palace of Culture and Science, as it is a symbol of Russian domination. It is just as well that the does not seem to know the history of the Belvedere or Namiestnikowski Palaces. Following his logic, both would be knocked down and president Komorowski would be homeless.

Once upon a time one could bump into Miłosz, Szymborska and Tomas Venclova walking together through Krakow’s Planty (a series of parks encircling Krakow’s Old Town- CK) Venclova, the great Lithuanian poet and great friend of Poland, bought a flat in Krakow just so he could go on such walks with such companions. He even flew over America for no other reason than to walk and talk with his Polish friends.

Miłosz is no longer. Szymborska has gone. There are no more Nobel laureates in Kraków. Szymborska once wrote ‘The next day—without us.’ That day has come. Without them Krakow is different. Poland is different. They are poorer.

Only philistines have a good time of it in today’s Poland. They have ignored the  warning of our national bard, ‘cursed are the people who kill their own prophets.’

However,this same prophet himself said that he came from a ‘foreign mother’, like Miłosz a Lithuanian one. He also wrote ‘Lithuania, my fatherland!’ What can he teach us, we true Poles!

Symborska saw it. She wrote about it. ‘We are surrounded by an ever-growing circle of dullness.” Perhaps, thanks to her poetry, that circle of stupidity will become a little bit smaller.

Nice info. Thank you.
all face the problem. finish with a calm heart and brain are cold and are trying so hard ... cara membesarkan penis

I listened to what you write, and it can add insight for me . Thank you very much