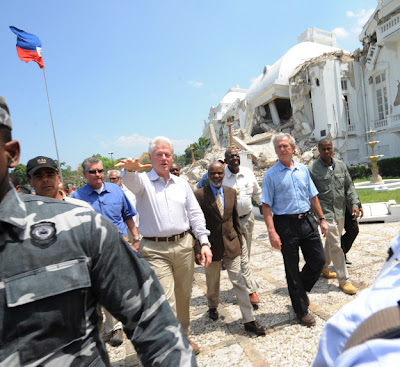 The Miami Herald has called him ‘the czar of the recovery effort’. Esquire magazine has labelled him the ‘CEO of a country without leaders.’ German magazine Der Spiegel describes Clinton as the lord of Haiti, ruling through his former aide Gary Conille, the current Haitian PM.

The former US president is directing the reconstruction of the poorest country in the western hemisphere, which was devasted by an earthquake in 2010. So far he has been doing so with some success. He has attracted business people and investors and has been able to count on the help of numerous FOBs (Friends of Bill) amongst the political and business elites of the USA. Clinton’s wife, Hilary, is head of US diplomacy and through this direct link he is trying to make sure that the US does not forget the country which, due to its poverty and turbulent history, has been called the ‘cursed island’.


Hilary’s husband plays many official roles—he is UN special envoy to Haiti and also represents the Clinton Global Initiative, the William J. Clinton Foundation and the Bush / Clinton Foundation for Haiti. He was also co-director of the Interim Haiti Recovery Commission, which coordinated humanitarian relief in the aftermath of the quake. In October 2011 the conflict-ridden Haitian parliament  did not agree to extend the commission’s mandate but the president Michel Martelly wants it to be renewed, with Clinton at the helm. “Clinton is the most powerful administrator we have ever had” claims Johnny Celestin, a Haitian-American businessman.

Clinton paints a bright future for Haiti, which he predicts could become the ‘world’s first wireless country’, powered by ultra-modern technology and full recycling of resources. It is doubtful if this vision will ever come to fruition, yet the very idea has given some Haitians a glimmer of hope for the future.

The earthquake which hit Haiti on 12 January 2010 measured 7 on the Richter scale and was the most powerful to hit the country in 200 years. Seismologists had warned of the coming catastrophe but such was the chaos inside Haiti that little or no preparations were carried out. The effects were devastating. In the country of 10 million, 316,000 people died and many more were injured. Among the dead were the Catholic bishop Joseph Serge Miot and 102 staff from the UN mission. 1.5 million were made homeless. 190,000 homes, 4,000 schools and 30 hospitals were destroyed. Virtually the entire infrastructure of the country was wiped out. The streets were covered in 19 million cubic metres of rubble. To make matters worse, Haiti was hit by a cholera epidemic in October 2010 said to have originated from Nepalese UN troops. 515,000 people were infected and 7,000 died.

Two years later the Presidential Palace in Port-au-Prince is still a weed-covered ruin. As President Michel Martelly announced in parliament, over 8 milion people are without electricity. 5 million are illiterate. 8 out of 10 Haitians survive on less than 2 dollars a day.

Slow progress can be seen, however. More than half the rubble has been cleared from the capital’s streets. 430 km of roads have been rebuilt or repaired. ‘Only’ half a million people are still living in the 758 ‘tent cities’ which means that a million have been rehoused. Or perhaps not—many have been forced to take down their tents by the real or supposed owners of the land on which they were camped. (in Haiti it is next to impossible to know or prove who really owns what land.)

Nonetheless, new housing has been put up by aid agencies. People are even building on top of the mass graves dug after the quake. Some houses are little more than converted shipping containers or kiosks but others have been built in the traditional Haitian style—with doors front and back so that the inhabitants have two escape routes in case of earthquakes.

Clinton has played a large part in these modest yet undeniable successes. After the quake world leaders cam rushing in with promises of help: George W. Bush, Michelle Obama, Nicolas Sarkozy and UN secretary general Ban Ki-moon. 6 days after the disaster Clinton arrived and was photographed looking tearful beside piles of corpses and rubble. The other world leaders left and have not come back. Clinton promised to devote the next 3 years to Haiti. So far he has kept his word.

The former president admits that he has a huge debt to pay to Haiti. While in office he promoted the interests of US farmers and exporters. His administration forced Haiti to eliminate import tariffs. Haitian farmers did not stand a chance against the flood of cheap US imports. Before, Haiti produced 80% of the rice consumed in the country. Now, 90% of it comes from the USA. Clinton now admits that this trade agreement was a mistake.

Perhaps for that reason he has been so active both in Haiti and collecting money in the USA. The Clinton and Bush Foundation have granted over 1 million dollars to Haitian company GaMa Enterprises, which wants produce earthquake-resistant pre-fab housing units. Haitian fishermen have exhausted their lakes. Clinton has funded fish farms for rearing tilapi, a fast-growing African fish. The fish farms are powered by solar energy. 70% of the tilapi are sold while the rest are for the fishermen’s own needs. Before, a fisherman’s family had to get by on 400 dollars a year. Now, the fishermen can earn up to several thousand dollars. In the fishing villages there are schools and sewers.

In cooperation with the French government, the Clinton Foundation has helped 10,000 Haitian coffee growers improve the quality of their crops using the same methods of the famous Colombian Coffee Federation. Clinton and premier Conille laid the corner stone of the new Caracol industrial park—an investment worth over 300 million dollars involving businesses from South Korea and other countries. Caracol should guarantee 65,000 jobs, mostly in the clothing industry. 5,000 houses have already been built around the site perimeter.

The Clinton and Bush Foundation also donated 2 million dollars towards the construction of the first government building to be erected since the quake. The facility houses the technical department of the state university. “Haiti needs more engineers who can help to build a brighter and better future,” declared Clinton at the opening ceremony.

Clinton has also persuaded hotel firm Marriott and telecoms company Digicel to plough 45 million dollars into a new 173-room Marriott Hotel in the Haitian capital. Employing 140 Haitians, it is due to open in 2014. Many see this project as symbolic of a new beginning. At the function where the project was announced, Clinton said jokingly to the gathered investors, “It is my job, as UN envoy, is to annoy people like you so for so long that in the end you give up and come to Haiti.”

The Haitian government is seen as incompetent and corrupt. According to some sources, 26 million dollars have simply disappeared from the education budget. Clinton prefers to channel funds to NGOs. He has created a network of independent organisations and institutions which have become almost a parallel government. Many commentators believe that nothing important can happen in Haiti without Clinton’s knowledge and agreement.

The Haitian parliament, which had rejected two of the candidates for PM put forward by president Martelly, nonetheless agreed to appoint Gary Conille. In a previous post, Conille wrote speeches and translated French documents for Clinton.

Some have criticised Clinton for directing the Haitian reconstruction in a neo-colonial manner. There have also been criticisms at the way lucrative contracts have been awarded to his political allies and foundation sponsors. Clayton Homes is owned by Warren Buffet ( a generous donator to the Clinton fund ) and was awarded a contract to supply storm-proof mobile units to the town of Leogane for use as a school. It turned out that the units were not storm-proof and were contaminated with formaldehyde, as well being too hot to use as classrooms.

Residents of Cite Soleil, a huge shanty town in the capital which outsiders should stay away from even during the day, have ironically named the slum Clinton City. The moniker reveals much more sarcasm than it does respect.

It has to be admitted, however, that the energy and contacts of the former US president have brought numerous benefits to Haiti. Clinton, who as president led Haitian agriculture to ruin, now has the power in his hands to put the county on the road to a better future.

all of which have been presented by this website was perfect, good appearance and artikelnya..penuh color and full of meaning .. teknik memperbesar alat vital

I listened to what you write, and it can add insight for me . Thank you very much