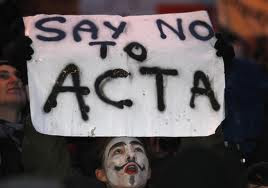 If anything positive can be taken from the decision by the Polish goverment to ratify the ACTA agreement, it is the protests that have been sparked by it. It is the biggest wave of protests that Poland has seen for a long time. We have witnessed the unusal sight of anarchist banners being waved alongside the white and red Polish flag. Most of the protesters are young people who, angered by the way they have been ignored by the government, have taken to the streets for the first time.  Unfortunately, the scale of the protests bear witness to the bad news—the ACTA agreement affects everyone, to a greater or lesser degree.


The protesters are accused of being on the side of criminals who profit from large-scale piracy at the expense of artists. In turn, they label their accusers as stooges of large corporations and governments bent on censoring the internet. Whilst the protesters must recognise that downloading films and music for free is not a fundamental human right, supporters of ACTA must recognise that the agreement is open to abuse, regardless of how harmless its stated aims may be. The text of the agreement itself may not seem so bad, until someone decides to take advantage of the huge possibilities which its powers offer.

Why do we need ACTA in Poland? “ Signing up to the ACTA agreement is in Poland’s interests as we are a country aspiring to belong to the most developed, knowledge-based economies” says the first part of the government’s official explanation. It is curious how we can have this aspiration when, as the popularity of reading is plummeting, more and more school libraries are closing down and their contents are transferred to public libraries (in 2010 there were approximately 300 cases of this). Public libraries, in turn, are being closed at an increasing rate. In this situation, books are often photocopied or scanned for use in lessons and teachers and lecturers often share files with their students. To deny that this is normal would be hypocrisy. With the ratification of ACTA will we see this practice stop? We do not yet know, but it is a theoretical possibility.

As well as education, there could be adverse effects in the cultural sphere. According to recent research those who most often download, share and copy music, books and films are at the same time the most active in cultural life. They tend to spend more than the average on legally published cultural material. Regular downloaders represent a half of regular music buyers and a third of those who regularly buy books and films.

Informal publication (or piracy) has always existed. In the 80s and 90s it was common for people to record music from the radio or records onto cassttes. At the turn of the millennium pirated CDs could be found in any street market. Artists and publishers managed to live with it then and they can do so now. “The more savvy artists even manage to make more money form new media” syas Katarzyna Szymielewicz from Fundacji Panoptykon. World famous artists such as Radiohead and Nine Inch Nail have sold their music as mp3 files for as much as the buyer wishes to pay. Polish mucis label Wytworna Krajowa recently did the same. Prosto (Polish Hip-Hop artist-CK) realising that most people do not want to buy a CD without hearing it first, allowed listeners to hear his album for free on the internet before giving them to chance to buy it on mp3 at a much lower price than the CD. In all of these examples, the strategy paid off, proving that it is best to let people legally sample material before buying it. Grabaz, singer from bands Pidzama Porno and Strachy na Lachy, amongst the most pirated artists in Poland, has harsh words for ACTA: ‘This agreement is a way of introducing censorship under the cover of anti-piracy. I am totally against it.”

As stated above, the government’s justification includes the argument that Poland should aspire to be amongst the ‘most developed countries’ which maintain the ‘highest standards of intellectual property protection’. A good example of this type of country is the USA where Myriad Genetics have managed to prevent some doctors giving their patients relatively cheap and quick breast cancer tests due to the fact that the company owns the patents on two cancer-causing genes. This example goes to show that intellectual property rights can often trump common sense.

ACTA, working on behalf of corporate interests, burdens internet service providers with the responsibility of monitoring their users for signs of suspicious behaviour. It also allows for the personal data of suspected pirates to be revealed. Wojciech Wiewiórowski, head of the data protection watchdog, says, “ACTA could create an alternative source of personal data for the police to use. Its rule also apply to telecommunications providers.”

Minister Boni insists that ACTA will not infringe on our freedoms in any way. I would be happy to believe him if it wasn’t for one small detail in Article 28: “Each Party shall, as appropriate, promote internal coordination among, and facilitate joint actions by, its competent authorities responsible for the enforcement of intellectual property rights.”

It is no wonder that there has been a public outcry across social and political spectrums…...

The original Polish article can be read here.
Posted by Czarny Kot at 23:39