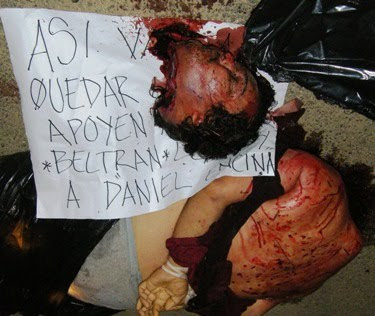 Mexico's northern borderlands are a war zone. More people die here than in Afghanistan. Drugs cartels wage war for market share and for control of the smuggling routes north. The gangsters kill police officers, politicians and journalists. They corrupt and intimidate the authorities. They have gained control over entire cities. The chaos is added to by a host of paramilitary organisations and countless guns for hire. The price of a life is around 1000 pesos-- 85 dollars.


According to official sources the state of Chihuahua, across the border from Texas and New Mexico, saw 2,276 drugs-related killings in the first 9 months of 2011. In the same period, according to the US Congress, 2,177 Afghan civilians died as a result of military action. The state of Chihuahua has a murder rate of 67 per 100,000 inhabitants. In Afghanistan it is 'only' 7 per 100,000. In the period from December 2006, when Mexican president Felipe Calderon sent the federal police and army to combat the cartels, to October 2011, Mexico's de facto civil war killed 47,515 victims. In mid-January 2012, the death toll passed 50,000.

In Afghanistan, the period from 2007 to October 2011 saw 16,774 violent deaths with over 11,000 accounted for by civilians. That is a considerably smaller death toll than that of Mexico's drug wars.

Mexican newspaper 'Reforma' reported in January that in 2011 there were 12,539 drug-related murders, a 6.3% increase on the previous year. (In 2007 the figure was 2,275). 1,079 bodies showed visible signs of torture and almost 600 had been beheaded (compared to 389 in 2010.) 900 women were among the dead. The newspaper did not give any details on how many children and teenagers were killed but some sources indicate that the numbers is at least 1,300. At least 27 journalists were killed.

The media are afraid to report on the drugs war. Only a few fearless bloggers dare to document the crimes of the cartels and even some of them have paid with their lives.

Mexico's crime capital is Ciudad Juarez (pop. 1.3 million) in the state of Chihuahua. It is located near the US-Mexico border. The skyscrapers of El Paso, Texas are clearly visible. Ciudad Juarez is considered to be one of the most dangerous places on the planet. The Sinaloa and Juarez cartels fight over millions of narco-dollars and have both been challenged by the Zetas gang-- formed by renegade soldiers from Mexico's special forces. The Sinaloa cartel is headed by Joaquin Guzman Loera, aka El Chapo (Shorty) due to his height of 155 cm. After the death of Osama Bin Laden, Guzman became the FBI's most-wanted fugitive. 'Forbes' magazine has estimated his fortune to be around 1 billion dollars. In Mexico different legends have been told about El Chapo-- he never parts from a loaded AK-47, even when sleeping, and he changes his mobile phone every morning. Guzman dispatched his men to secure key neighbourhoods in Ciudad Juarez and to dig tunnels under the border into Texas. The US authorities have so far discovered over 70 such tunnels. The Juarez cartel have put up a fight. Last year there were 2,000 drugs-related murders in Ciudad Juarez.

One of the foot soldiers in the war was 17 year old Jose Antonio, aka Frijol (Bean). His parents worked in a factory for 6 dollars a day while their son sat at home alone, watching TV and dreaming of an easier life. Aged 12, he joined the local street gang, the Calaberas (Skulls). The gang counted some 100 members. As a 14 year old Frijol was already taking part in murders and shoot-outs. "Some people came to us from the big fish and checked who was best at handling a gun. Once they had chosen us, they offered us a job. At first it was small errands-- acting as lookouts and looking after the small drug outlets-- but then they gave us important jobs. Killing."

The Narcos promised the boys that they would get away with murder-- under Mexican law a minor cannot serve more than 5 years in prison, even for murder. They also paid well-- 1,000 pesos for every murder. Frijol became a paid murderer for the Sinaloa cartel and does not feel any remorse. "When I hear the whistle of bullets I get an adrenalin rush but when I see a dead body I don't feel anything. Some days there might be 30 killings, the next day 10. It's all normal for us." The teenage foot soldiers do not live for long, though. When the Juarez cartel found out that the Sinaloa gang were recruiting in the neighbourhood they passed a death sentence on the whole barrio. Most of Frijol's associates have fallen to bullets or machetes. Only a few have escaped.

Jose Antonio survived because he was arrested. The police caught him with a full arsenal: 2 assault rifles and 2 Uzis. When he leaves prison he will be 19 and will almost certainly go straight back to the cartel. He knows no other life.

Sometimes the wave of violence overflows into the US. Last October some armed Narcos went across the border to recover a lorry load of marijuana. Hugo Rodriguez, a policeman from Hidalgo County, tried to stop them and was shot. He was wearing a bullet-proof vest and survived. After this incident Republicans accused the Obama administration of allowing the border zone to degenerate into a war zone. The Republican Governor of Texas, Rick Perry, has said that if he ever gets into the White House he will send elements of the US army into Mexico to protect the border from criminals. The National Guard already patrol the border and the US have sent unmanned drones across the border in pursuit of drug smugglers.

There are 7 main cartels in Mexico today but there is also a steady stream of ‘micro-cartels’ and armed gangs constantly fighting to make a profit from the anarchy. When security forces killed Nazario Moreno, head of La Familia cartel, a splinter group of particulary brutal killers appeared under the name of the Los Caballeros Templarios (Knights Templars). They model themselves on knightly orders of the Middle Ages and claim to be protecting the nation aginst tyranny. In reality they murder, rob and deal drugs. After a raid on one of their camps, police found knights’ helmets and white capes as well as the usual haul of guns, explosives and ammunition.

Ciudad Juarez is currently being terrorised by the reorganised New Juarez cartel. They have hung up large banners warning that everyday they will kill one city police officer. In January unknown attackers killed 7 police officers and agents, including 2 high-ranking officials and a woman. It is likely that the killings are part of a campaign to force the resignation of the hated Chief of Police Julian Leyzaola.

It seems that in Chihuahua it is a war of everyone against everyone. Paramilitary organizations are also responsible for many murders. One of them are the Mata-Zetas (Zeta-Killers) who target members of the notorious Zetas cartel. In a video message the masked leader  of the Mata-Zetas said, “We do not steal, we do not extort. We are the armed wing of the nation.” It is not known if the Mata-Zetas enjoy the unofficial support of the Mexican government. It is estimated that there are some 167 paramilitary groups operating in Mexico. Some are secretly hired by the state and local authorities who, with good reason, do not trust the official police. Some are thought to have the support of the Federal government. Their goal is not to eliminate the cartels—they are not strong enough—but rather to help ensure that one cartel enjoys local dominance in a given region. If one gang is dominant then the level of violence decreases. Normally, however, the paramilitaries are simply bands of hired guns in the pay of the cartels. Mexican organised crime expert Edgardo Buscaglia sys, “Mexico has become a bazaar for illegal special forces and a magnet for Russian, Ukrainian and Chinese mercenaries. There could be nothing easier than hiring 20 professionals to do a bit of dirty work.”

The USA accuses Mexico of not doing enough to control the violent chaos. Mexican politicians point out that the USA is largely responsible for the situation due to its failure to curb the massive demand for narcotics north of the border. (The cartels earn 30 billion dollars a year from USA drug users.) As well as this, the US authorities have failed to stem the huge flow of guns southwards, bought with narco-dollars. Between 2004 and 2008 Mexican authorities confiscated over 20,000 firearms which originated in the USA, 90% of the total number of confiscated weapons. 70% of guns purchased in Texas, Arizona and California end up south of the border. The strong pro-gun lobby ensures that the situation remains unchanged.

Commentators agree that president Calderon’s policy has failed and has only led to an increase in violence. The army and the federal police will never destroy the cartels. A certain amount of liberalisation in drug laws, enabling people to earn money legally from narcotics, is surely only a matter of time. For now, however, the blood will continue to flow. In July Mexico has parliamentary elections and Calderon’s party will want to have some successes in the fight against the cartels to show to the electorate come polling day.

The original Polish article can be read here.

From the archives: Mexican Gothic
Posted by Czarny Kot at 23:42

Helpful once ya news,
thanks a lot ya pa admin has given this good news. cara memperbesar penis terbaik

I strongly agree with your opinion that for the latter especially delivered , really can make me amazed . but did you know that too often in front of the computer can cause illness Obat Sakit Sendi Lutut

After doing some research online, I got my first electronic cigarette kit on VaporFi.

Find out how 1,000's of people like YOU are earning their LIVING from home and are fulfilling their wildest dreams TODAY.
SUBSCRIBE FOR FREE

Ciudad Juarez is currently being terrorised by the reorganised New Juarez cartel. They have hung up large banners warning that everyday they will kill one city police officer. In January unknown attackers killed 7 police officers and agents, including 2 high-ranking officials and a woman. It is likely that the killings are part of a campaign to force the resignation of the hated Chief of Police Julian Leyzaola.