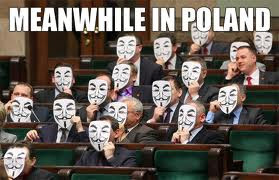 The discussion over ACTA, like so many debates in Polish politics, reminds one of a publicity stunt, albeit on a larger scale and with more emotion involved. People have taken to the streets,there have been chanting and shouting, opposition parties are trying to ride the wave of discontent and the ruling coalition are trying to pretend that nothing is happening. In all of this there has been precious little rational debate over the issue at hand. ACTA is not a charter for internet censorship. The treaty is concerned chiefly with counterfeit goods and does not really focus on the internet at all. Only 10% of the whole text deals with digital content and the rules it states merely repeat the laws which have been in force for years.

ACTA is a treaty negotiated by 37, mostly developed, countries. The first signatories include the USA, Singapore, Austrailia and Japan. Not amongst the signatories are Asian countries notorious for counterfeiting.

The aim of ACTA is to establish international standards in the fight against intellectual property infringements. Most of the signatories are countries which have high labour and production costs and therefore cannot compete in these spheres with countries such as Bangladesh. Instead, their comparative advantage lies in having the best technology and the best scientists and this is what ACTA is designed to protect. Poland, which currently has low production costs by European standards, should also take this into consideration. Today we are a supplier of labour and we are host to many factories but this will not last for ever. Experts predict that within 3 years we too will see jobs and production facilities exported to Asia. After that we will have to rely on high quality, innovation and an educated workforce to compete. We should protect these things rather than let our Eastern competitors copy them.

Those protesting against ACTA do not pay any attention to these arguments, despite that fact that the treaty will help protect the jobs of many of them. The protesters are fighting for the internet. Of course, ACTA also regulates intellectual property rights online but…..it does so by duplicating existing EU laws. Analysis carried out by the European Commission and the Polish cabinet confirms that if ACTA is implemented, no changes in the present law will be required. The treaty repeats European Parliament directives dealing with intellectual property rights issued in 2001 and 2004.

These facts are highlighted by those organizations in Poland which are in favour of ACTA. “In my opinion the debate over ACTA has been hijacked by a demagogic frenzy. It is not true that this treaty will somehow gag freedom of speech on the internet. People might say that they have read the treaty but they obviously do not know Polish law. Simply speaking, ACTA does not add anything to existing intellectual property laws in Poland” says Jacek Bromski, president of the Polish Filmmakers Society. Others who have welcomed ACTA include president of the Polish Composer’s Union, Jerzy Kornowicz and the chief of ZAiKS (Union of Authors and Screenwriters) Krzysztof Lewandowski.

Obviously, there are some aspects of ACTA which deserve criticism. The most deserving is the way in which the treaty has been passed—quietly and without wide-ranging public consultation both in Brussles and Warsaw. If it had been carried out differently, the protesters might understand how the treaty changes very little with regards to the internet.

In a few months Poland plays host to Euro 2012. Already customs officers have confiscated large amounts of counterfeited merchandise, clothes and other accessories bearing the tournament logo. Despite this it is likely that come kick-off the bazaars and street markets will be full of such products. ACTA is aimed at this and not internet users surfing YouTube and doing their homework with the help of Wikipedia.

The original Polish articel can be found here.
Posted by Czarny Kot at 23:38

eToro is the ultimate forex broker for newbie and pro traders.